#GuelphTurf at the RBC Canadian Open

I have had my eye on volunteering in the Canadian Open for some time.  It is our national Championship, and an event that I have always found time and reason to watch from start to finish.  Throughout my career I have been fortunate enough to work a number of other events in the US (The Deutsche Bank, The Players Championship, several US Open Qualifiers, The CVS Charity Classic, The US Women's Amateur etc...) but I have never had the chance to work the Canadian Open.  Upon reflecting of my past experiences this spring, I realized it has been some time since I have felt the grind of a PGA event. So when I looked ahead and saw an opening in my schedule during the first week of June, I jumped at the opportunity to be a part of the 2019 Canadian Open at Hamilton Golf and Country Club.

I could not have chosen a better time to throw my hat in.  Immediately upon my first day I realized how deep the Guelph Turf program's roots run on the Hamilton G&CC turf staff.  Superintendent Rhod Trainor, Assistant's Tracy Fowler and Jordan Kitchen, as well as Second Assistant Chad Oberle and several other senior staff have all passed through the walls of the U of G and the GTI for an education in turf management.  Whether it be the Degree in Agronomic Sciences, The Associate Diploma in Turfgrass Management (DTM), or our infamous Turf Manager's Short Course (now 50 years old!) - there is no shortage of #GuelphTurf Alumni on the Hamilton G&CC Turf Team.  And to my surprise, the counting didnt stop at the employees -- Just as soon as volunteers started arriving, the numbers kept adding up.  I think I lost count at about 25 when all was said and done ... and I am certain I missed a few.  It was almost like a mini reunion.

In my previous volunteer experiences I have been lucky enough to secure jobs like fairway mowing, greens mowing, and collecting speed and firmness data -- these are the good jobs as far as a volunteer goes.  But I wanted to try something new this year and open up some of the good fortune I had been graced with to other more deserving young volunteers.  This time around I requested to be on the bunker crew.  Most would agree that bunkers is not their first choice when it comes to tasks on a golf course -- but I have always love raking bunkers.  I was excited to get back in the trenches and produce some of the most perfectly raked sand traps the Tour has ever seen (I was also hoping I might run into a few stand outs to recruit and enroll in our DTM program this fall!).  Of course I am no strangers to bunkers -- I have worked at a wide range of clubs with varying standards of quality, styles and rakes -- I would consider myself to be about as seasoned as one could be with producing high quality bunkers under normal conditions.  The Canadian Open, or any PGA event for that matter, is not normal.  I was amazed to discover just how much of a challenge it is to produce a surface that was to the standard of the hovering PGA Tour officials.  I was also surprised to observe just how much the texture of the sand changed day to day -- which in turn forced us to adjust our raking methods and find new ways to overcome the challenges.  The week started off wet, so our metal leaf rakes did well to fluff up the sand and produce straight and consistent furrows in each motion.  However, as the heat and sun increased, the sand become drier and lighter which made our rake patterns less consistent.  In particular, the outside tines were digging to deep and leaving a larger furrow than the inner lines (see photo below).  At first, this was not something that stood out to our crew or our supervisors until the Tour Officials pointed it out.  In speaking with them, their concern was not that the bunker was of poor quality, but rather that such a deep or inconsistent furrow could instigate a player to call for a ruling during play.  These actions eat up time and can result in significant delays so the Tour prefers us to remove all doubt from a player's perspective -- essentially meaning "we need this to be perfect"...literally!  So after closer inspection, Rhod, Jordan and Tracy agreed that if we bend up the two outer-most rake tines and reduce downward pressure, the result would be the smooth and consistent pattern the officials wanted. 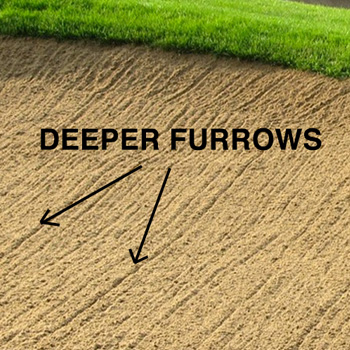 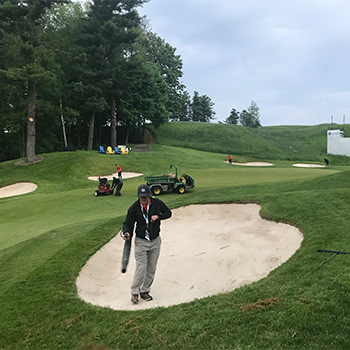 I must give credit to Rhod, Tracy and Jordan who coordinated, organized and managed the volunteers and maintenance staff with such grace, calm demeanor and a good helping of fun. If you have ever worked an event like this, you know that advance week and the 4-day tournament can be a grind.  But thanks to the experience and leadership of the management team, everyone remained in high spirits for the duration of the week.  I must also recognize the efforts put forward by Golf Canada to secure the new calendar date for this tournament, attracting the excellent field of players, and ultimately putting on a tremendous event.  I have attended several Canadian Opens as a spectator, and this year was truly the best experience I have had.

I look forward to making this volunteer spot an annual tradition for the Guelph Turfgrass Institute.  The opportunity to reconnect with our alumni, current students and be back in the field was just too good of an experience to miss out on.  Thanks to all the other volunteers who helped to make this event every bit as good as it was -- without your donated time, such an event would simply not be possible -- I hope everyone enjoyed the week as much as I did! 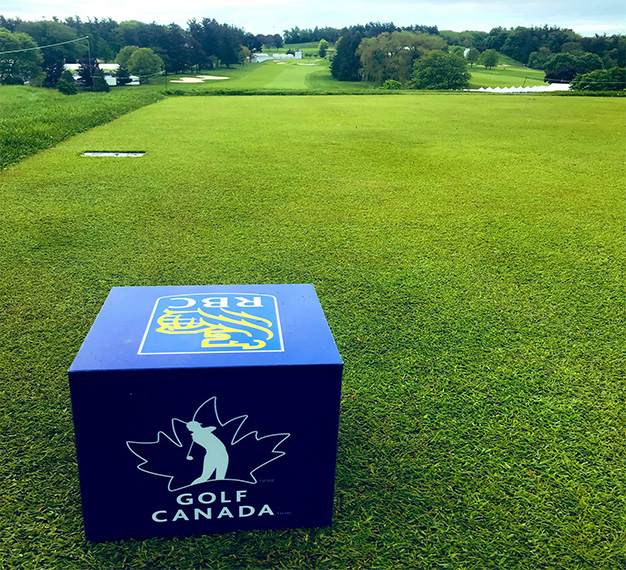